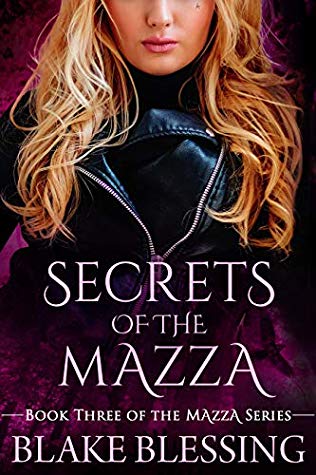 This is the third book in the Mazza series and we finally get some explanations–as well as some more questions. I’m satisfied with the things that were uncovered, but Ms. Blessing managed to throw a few curveballs that I didn’t see coming and I am for sure looking forward to learning more in the next book!

Isolde–Iss–is facing her biggest challenges yet. Not only has she learned some new information about being a Mazza and all that it entails, but she’s learning new things about her men–dubbed her “Lusty Legion”–and growing closer to them. Iss has to work her butt off to get stronger and develop her Mazza powers, which was pretty neat to see. Her weapon of choice was … interesting, to say the least, lol.

I honestly find Iss to be a bit annoying, so there are times I felt kind of frustrated with her, but it wasn’t enough for me to dislike the story itself.

The book starts out with the guys being upset with Yunez over lack of information and some secrets. Without giving too much away, it’s interesting to see the interaction between the guys and Yunez (and Rand) during this time. I love seeing the progression of how they work things out, but it definitely has some angsty parts that pull at your heartstrings.

This book heavily features Yunez, which I’ve been dying for from the start. There’s still so much we don’t know about him, but it was awesome getting a little more face time from him. The progression of how he fits in with the group was so worth it and I’m not ashamed to admit I may have let out a girly squeal a few times while reading 😉

And if you want to know more, you’ve gotta read the book ;P

This book has plenty of angsty moments that caught me by surprise, but there are a ton of comedic moments, as well. Ms. Blessing has also turned the steam way up. I suggest you read this book by a fan … or at least have a T-A-L-L glass of ice water close by 😉

I can’t wait to read the next book to find out what happens next!