This was such a good book. I had never read anything by Ruby Ryan prior to this, so I didn’t know what to expect from her writing style, but I knew from the blurb that I had to read this story. I’m a huge fan of mythology–especially Irish and Egyptian–so that was a huge plus in my book that she included Morrigan and Anubis. Plus, while I’ve read books that had gods in them, I hadn’t read about gods of death and I was super excited to dig my teeth into this one.

Let me begin by saying the heroine–Beth–is a strong, independent, “don’t give a shit” woman who I would normally struggle with, but somehow the author wrote her in a way that I didn’t find arrogant or off-putting. Honestly, that’s a huge feat for me because while I love the independent woman attitude, it can turn ugly quick if you take it too far. In any event, Beth isn’t arrogant, but she does know who she is and her attitude is kind of refreshing in a sea of books with characters who don’t know who they are. Don’t get me wrong, I like those characters as well, but there are a time and a place for them … and for this book, Beth’s personality is perfect. She needs that moxy to be able to get through her interactions with these gods, lol.

Thanatos cracked me up so bad in this book. Poor guy just can’t take a hint. He’s also terrible at reading the situation. If you read my review of Starstruck–where aliens “invade” the earth and the hero is like a fish out of water–then you have kind of an idea of what I’m talking about here. All of them acted like this to a point, but Thanatos was by far the worst. He couldn’t understand why Morrigan kept insisting he be a little more careful of the things he says and try not to be quite so blunt all the time. It was a hilarious interaction that was so well done, and I’m smiling while writing this because it made me chuckle.

Anubis is the epitome of tall, dark, and handsome. He’s super chill and has a very calming air about him. He seems to take great consideration of the words he wants to say before he speaks them. He’s also very serious and contemplative. He also knows very little about this modern world, but he tends to think a little more than our dear friend Thanatos. He’s somewhat of an enigma and I’m looking forward to getting to know him a bit more in the books to come.

Mictlantecuhtli–lovingly nicknamed Mick, thank God–is definitely the lighthearted one of the group. He’s a bit of a jokester and enjoys teasing Beth and his fellow gods. He’s also a huge bookworm, and he’s absolutely amazed at all the available texts to read in this world. It’s fascinating to read his POV where he’s expressing his intense awe for all the various pieces of literature, and it also kicks you in the pants a bit to remember to be grateful for all the amazing books so readily available to us all. That was a lovely reminder and I cherished his childlike fascination. I’m excited to get to know him more, as well. His teasing and funny little quips throughout the book were some nice touches.

Then we have Morrigan … holy cow, she is a firecracker. She’s the one who seems to understand the modern world the most and is by far the most comfortable while being here. She’s also incredibly beautiful and she knows it 100% and isn’t afraid to show off her many assets–which happens to come in handy later in the book during a case they’re all on. I’m not a big fan of F/F themes, so that was my only negative here. I guess because it’s not something I’m into personally, so reading it just isn’t my thing, but it wasn’t enough to keep me from enjoying this book, nor will it keep me from reading the next books. I greatly enjoyed Morrigan’s character–if nothing else, for her immense entertainment value. She’s hysterical, lol.

There’s a wonderful amount of intrigue and the inner workings of politics. I’m not big on politics in general, especially in my books, but this was well done. Plus it’s more geared toward one of the politicians’ personal life rather than his politics, so it wasn’t like pulling teeth to read, ha. There was actually a significant amount of creep factor with this case that genuinely freaked me out. 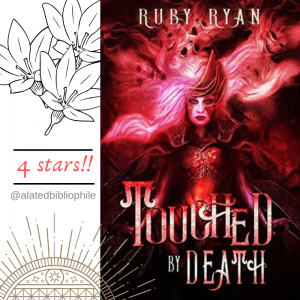 I thoroughly enjoyed this book and I think it’s going to be a good trilogy 🙂 Also, it’s release day, so, woohoo!! If this book sounds at all interesting to you, make sure you go check it out! We’ve gotta support our awesome indie authors. Then make sure you come back here and tell me what you thought of it!

Gas or Ass by Eden Connor