Two words people use to describe me.
What does that mean?
I impulsively jump into hobbies and get…obsessed.
Rock climbing. Bungee jumping. You name it.
Why?
Because I need to keep the glass full.
There’s no time for romance or sticky relationships.
It’s just not who I am.
-Perrin Michaels

Two words everyone uses to describe me.
What does that mean?
I’m fucking broken and bitter over it… Leave me alone.
War vet. Life failure. You name it.
Why?
Because I don’t fit in here anymore.
I don’t want to care about someone else when I’m stuck.
It’s just not who I am.
-Emiliano Espocito

Can two people really heal each other, or does it only work one way?

Wow. It’s been a while since I’ve read a contemporary romance that has checked all the boxes for me like this one has.

Steamy scenes that will singe your fingertips while you’re reading? Check.

A beautiful love story that elicits all the feels? Check, check, and check.

Ms. Blessing had me swooning one minute, laughing the next, and crying after that. I just … ugh. This book was just so good. The story revolves around two people who are doing their best to get by with varying degrees of brokenness. There was so much emotion in this book; it was angsty and heartwarming and sweet and sad all at once. At the heart of it is a story that I think is incredibly important–the way civilian life affects someone who has been in the military. My dad is a veteran, so was my grandpa, so is my father-in-law, and several other people in the family as well as some friends have been in the military, so I’ve always had a heart for anyone who has been in the military. I think they deserve a lot more recognition than they get and I thought the author did a fantastic job of showing the humanity and realism of this kind of life. Yes, these people are heroes, but they also have to make some terrible, awful decisions that they will live with for the rest of their lives. I loved that Blake Blessing showed that anyone who is or was in the military deserves respect while also giving examples of the raw consequences of some of these actions that flirt in the gray area of the moral code. I definitely wouldn’t say this book was an *easy* read, but it also wasn’t explicit in just how bad it was for them. A lot is hinted at throughout the book, especially during one conversation in particular toward the end, but I just thought Blake handled the balance between giving too much information and not enough quite well.

As for the characters …

Perrin–can we just talk about how effing awesome that name is, by the way? I seriously am so in love with it!–is an adrenaline junkie who obsessively tries new hobbies until she’s perfected them. She’s a little flighty and flies by the seat of her pants in just about every aspect of her life and she has no time for relationships–even, to a point, the relationship with her sister. As soon as conversation veers from fun and casual into the sentimental and deep, she’s out. I will say, Perrin has had a few pretty rough years that have helped shape her outlook on life and this is the only way she really knows how to cope. She prefers to always look on the brighter side of life and if it doesn’t help “keep her glasses full,” then she doesn’t want anything to do with it. Perrin is all about having fun and she has no desire for anything more than that.

Emil is a broken man after returning from a stint in the military. After all the things he’s seen and done fighting overseas, he’s plagued with guilt, regret, sorrow, anger, and so much bitterness, it seeps out of every fiber of his being. When Emil first enters the book, he’s volatile; a ticking time bomb just waiting to be set off. The first meeting between hero and heroine certainly does not start out well. In fact, Perrin is wary of him to the point of even being slightly frightened, and I don’t blame her one bit. To say Emil has baggage is putting it extremely politely. No matter what he does, his demons follow him, and until he’s willing to try something to get some help, he’s never going to be able to crawl out of the dark hole he’s found himself in. Emil is the epitome of one of my favorite type of heroes; multi-faceted, deep, charming, sexy, kind, and so giving. At first, he’s liable to fly off the handle at any lingering glance at Perrin, but his possessiveness is a huge part of how messed up his brain is in its current state. He’s lost so many people who were close to him, and that mixed with the harsh realities of war has really done a number on his psyche. It was heartbreaking. 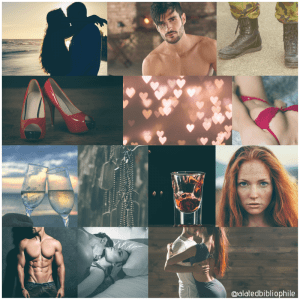 Without giving away any spoilers, there is an underlying message of hope sprinkled throughout the novel that was absolutely stunning. Emil and Perrin are amazing characters on their own, but together their chemistry is explosive. The sex-y scenes are so hot, I swear you could have fried an egg on my face while I was reading them! So, word for the wise: sit in front of a fan. ;P

Anyway, this book was incredible. Definitely one of my favorite reads of the year, and I would highly, highly recommend it to anyone who is a contemporary romance fan. Seriously–I was so impressed, and I can’t wait to read the next story Blake blesses us with (see what I did there?).

Check out my review for Blake Blessing’s paranormal reverse harem, Marks of the Mazza, here!