This was an incredibly unique reading experience. I’m a huge sucker for just about anything paranormal, but when I saw that the heroine is a tattoo artist, I was even more interested. Also, if I’m being honest here, I was incredibly intrigued by the cover. The romance community has some awesome cover artists and this one is no exception!

Adeline was a unique character. She’s both incredibly strong and terribly fragile. She’s gone through so much in her life and has had to beg, borrow, and steal to survive. She’s been used and abused and until her guardian/mentor had saved her as a child, she never knew any differently. After her guardian’s death, she’s left with her pseudo-brother, Lars, who is much more teddy bear than grizzly, despite his fierce appearance. The two of them own the tattoo shop where Adeline works as a tattoo artist, but at night she uses her incredibly rare magic to tattoo spells on the skin of people who need her specific brand of help. This has made her a target for the Magistrate–the magical version of the government. And yes, they’re as corrupt as they sound.

Then there’s Nicholas … who is blackmailed by the Magistrate to bring in Adeline for their own nefarious purposes. As the danger escalates and the trio is thrust together in a strange partnership of sorts, Adeline finds herself being drawn to Nicholas in ways she can’t explain–effectively putting her mind at war with her heart. As more of Nicholas’s powers are brought to light, Adeline wonders just how trustworthy this man could actually be.

As I stated in the opening of this post, this was such a unique read. I had read books that feature mages imbuing magic into the ink they use to tattoo, but I had never read one where that is the focal point of a story. It was fascinating to get inside the mind of such a powerful mage. Also, not only are you getting a story with great magical elements, but the author really takes you through an emotional roller coaster. There are parts that are hilarious and parts that made me want to cry. I always say it’s a great writer who can invoke that kind of emotion in their readers. 🙂 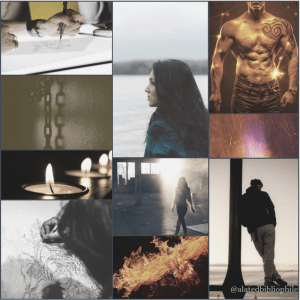 Honestly, I greatly enjoyed this book and I can’t wait to read the next installment. I would highly, highly recommend it for anyone who enjoys a good paranormal romance and doesn’t mind a little slow burn. It’s an all-around fun read!

As always, if you read this book, feel free to stop by and let me know what you thought about it in the comments. I always love a good book chat 🙂