Evergreen Academy was meant to be my fresh start. My hair was on point. My skin was flawless. And now I wore the hell out of my clothes instead of hiding them.

Even running into Ryder hadn’t thrown me. So what that the silver-eyed devil who tormented me for years now ruled my new school with a band of boys everyone called the Knights. The four of them were devastatingly rich, enviously handsome… and heartbreakingly cruel.

But the Evergreen Knights didn’t scare me. I had my own plans and no reason to enter their little world… until one fateful night and a masquerade ball changed everything.

I saw something I shouldn’t have and now I’ve been Marked.

If they want to take on Valentina Moon… bring it on.

Evergreen Academy is a reverse harem high school bully romance with a sweet tinge of mystery. This is the full series and features language, dark themes, and sexual scenes. If you’re cool with that, dive in!

There are a lot of interesting people here in Salem Point. My neighbor, Knight, is the sweetest guy I’ve ever met. I have an instant connection with him that I can’t quite explain. Then there’s Christian, the douche bag at school that can’t seem to take his perfect eyes off of me. And to be fair, it’s not a one-way street. And finally, there’s Wyatt, the creepy guy that I only seem to find in dark corners following me around. Between mean girls and the most beautiful guys I’ve ever seen, my life is complicated.

It turns out, it’s about to get a lot more complicated. The people of Salem Point aren’t what they seem. There are monsters in this town, and I might be one of them.

I know I have plenty of ARCs to read, so I’ll probably move on to one of those, but we’ll see what’s next 🙂 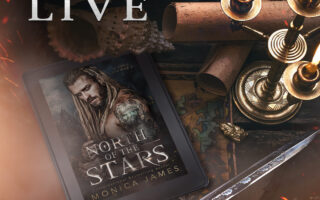 NEW RELEASE | North of the Stars by Monica James