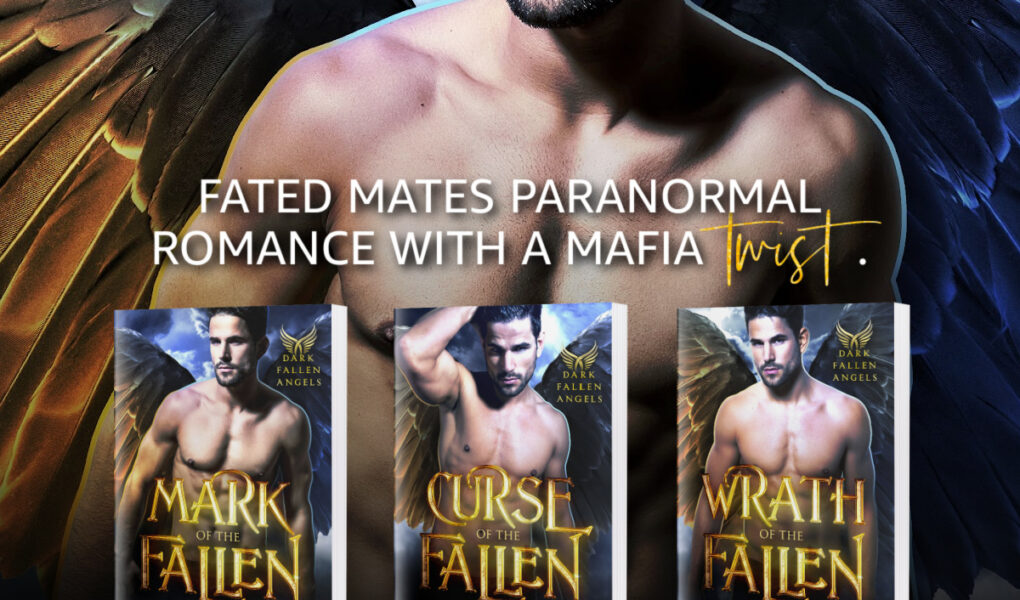 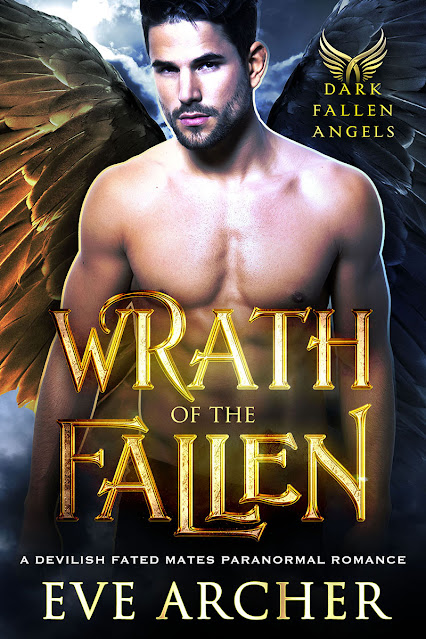 Everything I thought I knew about myself was a lie.
Dominick Vicario, mafia don and leader of the Fallen, was right about me. But he was also wrong. I do carry the trace of an angel. But not for the reason he thinks.
When the truth about me is revealed, it isn’t the demons who are after us this time. It’s the archangels. And they’ll stop at nothing to eliminate the evidence of their own darkness—me.
With a host of vengeful angels chasing us, Dominick makes a pact with the Prince of Demons. A pact that leads us straight into the demon prince’s Parisian lair–a place so decadent and demonic that we may never escape. Or want to.
With angel armies and demon hordes gathering, who can we trust? And if Dominick makes a deal with the devil to save me, will his soul be lost forever?
Dominick and Ella’s story finishes in the demonically steamy book 3 in the Dark Fallen Angels trilogy. This fated mates paranormal romance is a full-length novel, and it ends with an HEA. 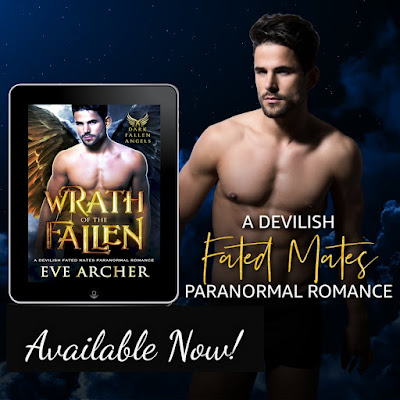 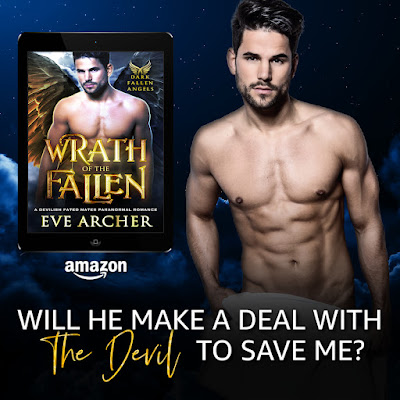 EXCERPT
Dominick
I eyed the demon. “How did you find us?” I’d agreed with Gadriel that the holy city would be an unlikely hunting ground for demons, but it appeared we’d been wrong.
“Jerusalem has always been a place where demons can foment dissent. We could live forever feeding off the bitter fighting over holy sites and the bloodshed in the name of your god.”
I didn’t say that he wasn’t my God any longer, since he’d cast us from his presence. Despite it all, I would forever remain his creation.
“You’re saying that Mastema keeps demons here?” Rami asked.
“It’s a prime posting.” The demon licked his lips. “So much penance and righteous evil.”
I scowled at the delight the demon took in the torment of others. Then again, he was a demon.
“Our prince sent word that you were to be found. I happened to be the demon who got lucky and witnessed a celestial battle on one of the old city’s rooftops.”
I sighed, wondering how many others had seen three angels battling, and how many had convinced themselves they’d been seeing visions. Our battle with Azrael would be the source of many spiritual transformations, and many hours of therapy.
Rami shifted next to me. “Speak quickly, demon. We’re losing patience.”
The cruel grin slipped from the demon’s face. “Mastema would like to issue an invitation.”
That startled me. “An invitation?”
The demon nodded, his gaze moving to the women. “He invites you all to join him in Paris.”
“Paris?” Rami was clearly stifling a bark of laughter. “Mastema has invited us to his demon lair?”
The demon glanced away from the women, clearly not bothered by Rami’s reaction. “It is one of the few places on earth where you will be safe.”
I opened my mouth to argue but I couldn’t. He was right. Mastema’s demon lair was someplace even the archangels wouldn’t dare breach, unless they wanted a war with his hordes of demons.
“You’re suggesting that a demon’s lair would be a safe place for us?” Rami asked. “Two fallen angels, a Demi-angel, and a human?”
The demon shrugged. “You could take your chances out here, but the angels will track you down again. And next time, you know they’ll send more.” He glanced up as if he could see through the floors of the building. “I’m surprised they haven’t arrived to mourn their dead brother already.”
My pulse fluttered. As much as I hated it, the demon was right. We didn’t have much time or many options. Uriel would be coming for his sword, which we’d left in Azrael so we couldn’t be tracked by it, and Azrael’s body would be found. I did not want to be here when either of those things happened. Even if we moved from place to place and assembled more Fallen to join us, we would not be able to fight off the angels. Not alone.
“Mastema is offering us sanctuary?” I asked.
The demon cringed. “I think he’d prefer you not use that word, but yes. He is offering you a safe place.”
“Dominick,” Rami growled, closing the distance between us. “You can’t be seriously considering this.”
“Do you have any better options?”
Rami spluttered for a moment. “We can go to Venice. The palazzo has fortifications. Or New York. There are plenty of Fallen there to help us.”
I met his eyes, recognizing the desperation in them. “It won’t be enough.”
My friend’s shoulders sagged. “You know we cannot trust Mastema.”
I knew that was true, but I also knew that the demon had his own bizarre code of honor. If he pledged to do something, he would not go back on it. Especially if there was something in it for him. Something more valuable than holding a few angels and humans hostage. Above all, the prince of demons was a shrewd negotiator and businessman, dealing in evil and human suffering like others trafficked in commodities.
“What is the demon prince’s price?” I asked, swiveling back to face the demon. “I know he does not do this from the goodness of his heart. He has neither goodness nor a heart.”
The demon stroked a hand down his cheek, his dirty nails rasping across the dusky stubble. “He only wants the same thing you want.”
I doubted that, but I was silent, to let the demon continue.
“In exchange for safe harbor for you and your females, Mastema requests you and your Fallen join him.”
“Join him? I hope he does not believe we would ever join his ranks of demons.”
“You could never be demons,” the demon said. “Even though you can embrace wickedness with the best of us.”
“Then how could the Fallen ever join him?” Rami asked.
“We join forces.” The demon gave us both a conspiratorial smile. “The demons and fallen angels come together as one to battle the angels.”
My blood went cold. “But that would—“
“Bring about the final reckoning of the universe,” the demon said, rubbing his hands together. “The end of all days.”
When—if defeated—the Fallen would receive our final judgment. 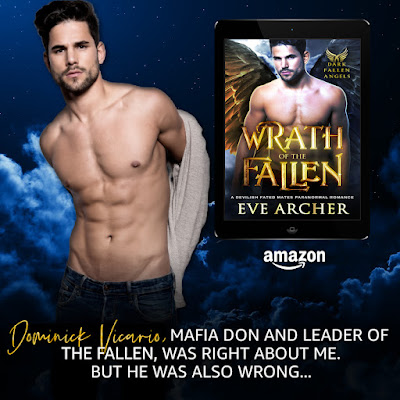 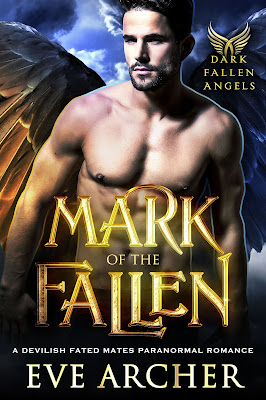 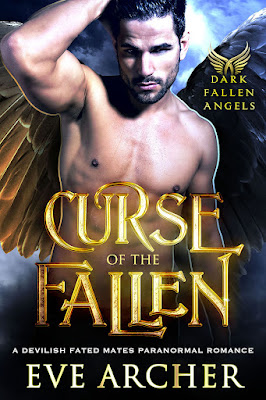 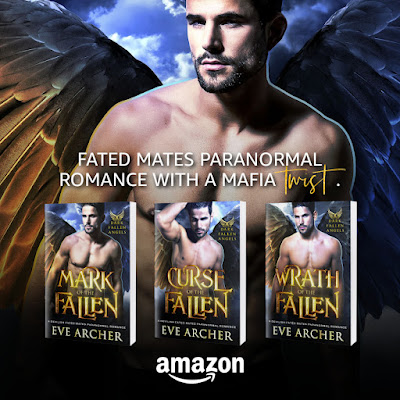 Eve Archer writes sinfully hot paranormal romance with devilishly wicked heroes. Who doesn’t love a smoking hot bad boy (or very naughty demon) who meets his match when it comes to true love?
Eve adores traveling and puts as many of the exotic places she’s visited into her books as possible (which gives her another excuse to plan more trips)! She’s sailed the Adriatic, hunted for secret waterfalls in Bali, and floated in the Dead Sea. When Eve isn’t bopping around the world researching books or writing them, she can be found wrangling her two teenagers, two moody cats, and one very energetic dog. Luckily, her wonderful husband does not need wrangling. 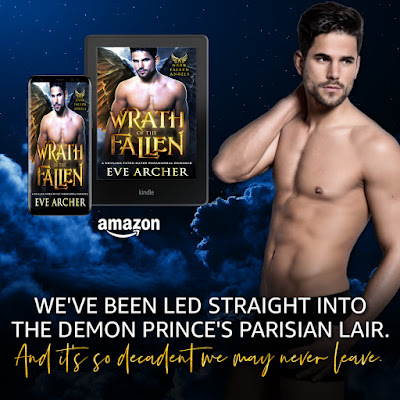