This is the first book I’ve read of Clara Hartley’s. In fact, I hadn’t even heard of her until a few days ago. I discovered her through one of the facebook groups I’m in where she was looking for reviewers for one of her new releases. It sounded good, so I joined her group and signed up to be a part of her ARC team. This book was an available title for review, so I requested to review it. I’m really into dragon shifters recently, so I was all about giving this new (to me) author a shot–and I’m not disappointed in the least.

I love Ms. Hartley’s writing style. She somehow perfectly encapsulated humor as well as angst, while making you feel so indignant on the heroine’s behalf of the treatment she receives. Sera is extremely ambitious and goal-oriented. She has a specific target in mind and she’s worked all her life to get to where she is. She’s gone to great lengths to hide her curse–every time she touches someone, they feel intense and excruciating pain–and attempts to live a normal life. This includes her constant wearing of gloves and robes with long sleeves and collars, taking care not to leave any skin exposed that could come into contact with another person. It’s a lonely and isolating life–she hasn’t even hugged her parents or her sister since before she was nine–but she’s determined to make the most of it.

Enter the [devastatingly handsome] princes. When they touch her, her curse doesn’t affect them. What they do feel, however, is a warm, enthralling, tingling sensation whenever their skin touches.

Each prince has a unique personality, and I have to admit–I wasn’t too impressed with them at first. They’re all spoiled and think far too highly of themselves, though Gaius is the worst of them. I got so frustrated with them when they’re first introduced, though three of them came around pretty easily. Gaius is infuriating and treats Sera like scum. Even though he has a pretty good reason behind his disdain, it doesn’t fully excuse his actions, and quite frankly, I was hoping she would snap and punch him or something–I sure wanted to!

There were a few parts in this book that were somewhat inconsistent and confused me a little bit. For instance, they’re all a little wary of her at first, and then it’s like they instantly fell for her and had zero reservations. The instalove sorta bugs me, but it’s a common occurrence in romance novels–especially paranormal/fantasy–so it’s not enough to turn me off from a book; just annoys me a little bit. But that’s just me [:

Also, speaking of things that bug me … [spoiler]After her curse is made public knowledge and the rumors about her are flying, the guys ditch her, which was way too easy for them to do, in my opinion. If they cared so much about her, they should have fought a little harder to remain in her life. Also, Micah is the only one who I felt truly repented the way he should have. Sure, Gauis and Kael apologized, but not nearly as much as I felt like they deserved to. In my opinion, Micah was way less hurtful, yet he was the one who begged for her forgiveness. It’s not entirely surprising since Micah is probably the most kindhearted of them all, but still. I would’ve liked to see a bit more groveling on the other guys’ parts. [/spoiler]

Honestly, this book reminded me so much of Trickery, and I love those books. I definitely think most people who like the Curse of the Gods series will probably enjoy this book, as well.

In all, I devoured this book in a day and a half. I couldn’t stop reading. I had to find out what happened next. I loved it. This book had me laughing one minute and crying the next. The emotions are so raw and the guys are so swoon-worthy. And, oh my gosh, the puns. There are so many dumb but hysterical puns in this book, which is right up my alley in the humor department. [;

Also, I just want to point this out–the world building in this book is amazing. I’m constantly amazed by fantasy authors who create these fictitious worlds with all these different races of people. Not to mention the names of said people, the words of the spells, and the names of the places. I was super impressed and it’s clear that she put a lot of work and effort into it. I love reading a story where you can feel the passion of the author behind the words they’ve written.

I highly recommend this book. It was so good, and I’m dying to read the next one! 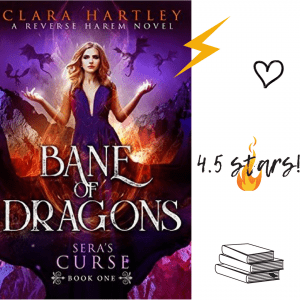 Follow me for more book-related news, reviews and more [: 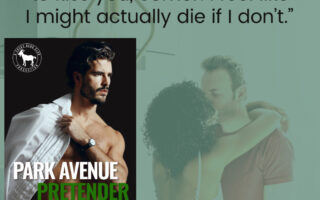