My heart on lockdown, my plan set, I wait.

Five years ago, I was set up by the woman I loved. Five years, I’ve spent locked in a cage waiting for the moment to get my revenge. Now, I’m free and ready to take my pound of flesh.

Then one day Rebel steps inside the cell I’m still trapped in and derails everything. She’s fire and fury and—beautiful. All my carefully laid plans—my vengeance—gone somewhere between the moment our eyes meet and the moment she says hello.

My trust shattered, my heart broken, I enter.

Five years ago, I was in a wreck that tore my body to pieces. Five years, I’ve inked my skin, hiding the scars that tell the brutal story of a night I barely walked away from.

When I step inside the beautiful cell Saint’s trapped himself in, everything changes. He’s a beast in a cage—predatory, beautiful, and dangerous in a way that makes me want to run.

Truths from the past emerge alongside old enemies. We must question everything—including each other. Can our newfound love survive, or will it crumble beneath the weight of the past and the scars that threaten to break us?

I watch Saint get dressed from my position in the bed. It didn’t take him long after this last round to decide to get up and leave. And why shouldn’t he? You don’t stay over for a casual hookup. I understand this, but that doesn’t mean that it doesn’t hurt. This is why I’ve never been big on being a casual kind of person. I don’t like how lonely it makes me feel.

I sit up as Saint makes his way back over to me. He leans down and kisses the top of my head.

“Thanks for tonight, Cupcake. I’ll see you around.”

He heads toward the bedroom door when the anger hits me. I don’t let my temper come out often but when I do, you better watch out because it’s like a tornado with the ability to wipe out the entire fucking state.

“Are you fucking serious right now?” I hiss, wrapping the sheet around me and climbing from the bed.

He’s heard me because he stops in his tracks and his back straightens. I watch his back rise and fall with what I’m assuming is a deep breath.

When he turns to me his face and eyes are blank. I get nothing of the man that was inside me not even ten minutes ago. I don’t get the man I had at the bar nor the man I brought home with me. No, the person I get now is the man that’s still locked behind the prison walls.

“What?” he asks in frustration.

I stand there wrapped in nothing but a sheet, my pussy still throbbing from his brutal thrusts, and stare at Saint. What happened? When did I lose the man that was in my bed? The one that gives sweet kisses to the neck and runs his knuckles down my face?

I keep my voice soft because if I don’t, I’ll lose the last hold on my temper that I have. Saint sighs running a hand through his hair. He walks back over to me.

“Look. That,” he waves his hand in the bed’s direction, “was all that this was ever going to be.”

I’m not stupid. Understanding that’s all this was isn’t hard when he continuously points it out, but he could have lounged in the bed with me for five fucking minutes instead of jumping up the minute he got off. I’m not going to examine how I felt when he did that. I’m going to do what he seems to be good at. I hide everything that’s building inside me behind a flimsy wall quickly built.

I raise a brow at him. “You couldn’t wait for five fucking minutes after you shot off to climb out of the bed and get dressed.”

“I didn’t want you to get the wrong idea if I stayed in bed with you,” he growls.

I snort. “What? That you’re a decent human being instead of an asshole?”

“That this is more than a few rounds of sex, goddammit!”

I shake my head and cluck my tongue. “You’re pretty full of yourself, aren’t you?”

“You telling me that you weren’t already feeling it?”

He holds my eyes, so I do my best to keep my face blank. I was already feeling it, but I’ll be damned if I let him learn that. Not if I ever want to see him again, and I do. There’s something about Saint that calls to me. I don’t know if it’s the loneliness I can read in him, the anger and pain, or if it’s the man himself. But I’m going to take Marina’s advice. I may not have wanted a relationship, but something put Saint in my path for a reason. I’ve just got to figure out what that reason is.

“No, Saint. I wasn’t already feeling it. Unless you mean the three orgasms you gave me before you jumped out of bed like it was on fire. If that’s what you’re talking about then hell yeah I was feeling it.”

His lips twitch and his eyes warm a fraction. It’s not a full-on victory but I’ll take it.

“Now, let me lay this out for you, sugar. I know that you’re not looking for anything permanent. Neither am I. If you’re worried I can’t keep this casual, then don’t be. You give me good orgasms.” I shrug. “I’m not willing to give those up yet. So, we’ll continue this until the fire between us burns out.”

Let’s hope lighting doesn’t strike me dead for the lie I just told. He must accept me at my word because his body relaxes, and I even get a tiny smile. One of these days I’ll get the full smile and I’m sure when I do it’ll be the moment I fall. Until then, I suppose I’ll hang on and enjoy the ride.

I let go of the sheet, feeling it flutter to the floor, grab a fist full of his shirt and pull his mouth to mine. I swirl my tongue around his, tantalizing and seducing, before pulling back with a nibble to his lip.

“You can go now. Call me when you want to do this again.” I turn, still naked, walk out of the bedroom, and head towards the bathroom. I toss over my shoulder, “If you don’t mind, would you lock the door behind you?”

Once I make it to the bathroom, I wrap my hands around the lip of the sink and bow my head as my breathing escalates. The flimsy wall I had eradicated comes crashing down. A tear leaks down my cheek as everything that the wall was holding back comes rushing in like a tsunami. I raise my head and look at the woman in the mirror. I don’t see the beautiful woman with bright green eyes and curly blonde hair. I see a woman whose ex didn’t love her enough not to get high before getting behind the wheel. I see a woman who’s been belittled and controlled by the man that should have loved her. I see a woman who’s too scared to fix herself, so she tries to fix someone else.

The slamming of the front door is the only indication that Saint has left and I’m assuming he may not be thrilled about the fact that I dismissed him. He’ll have to get over it. I needed to get away from him before I couldn’t handle any of the shit anymore. I’ve left the ball in his hands so it’s going to be up to him to play the game or get off the court.

I wipe my eyes and turn on the shower. It’s after two in the morning and I’m freaking tired, but I’m also sweaty and smell like a brothel. No way will I be able to sleep until I’m clean.

Once I’m under the spray of hot water, I let it beat down on me releasing the tension I didn’t realize I had. My eyes start to get heavy, so I grab my shampoo. The smell of green apples fills the small space as I scrub my fingers through my hair.

Minutes later, I’m shutting off the water and stepping out. I grab my fluffy green towel from the rack and dry my body off. Wrapping it around me, I head back to my bedroom. I have all intentions of putting on pajamas, but my bed looks way too inviting.

I lay down across it telling myself I’ll get up in a few minutes to dry my hair and put on clothes. Things don’t go as planned, though, seeing as soon as I hit the comfortable mattress I’m out within minutes and don’t wake until morning.

Lynne lives in the quiet country with a bossy mister and two little divas. If you don’t catch her with her nose in a book or her fingers scribbling on paper, she’s usually right in front of the television with her family. She loves anything that glitters and has a weird habit of collecting pens. She thinks seafood is disgusting, beach sand is the devil, and Tom Hardy is life. 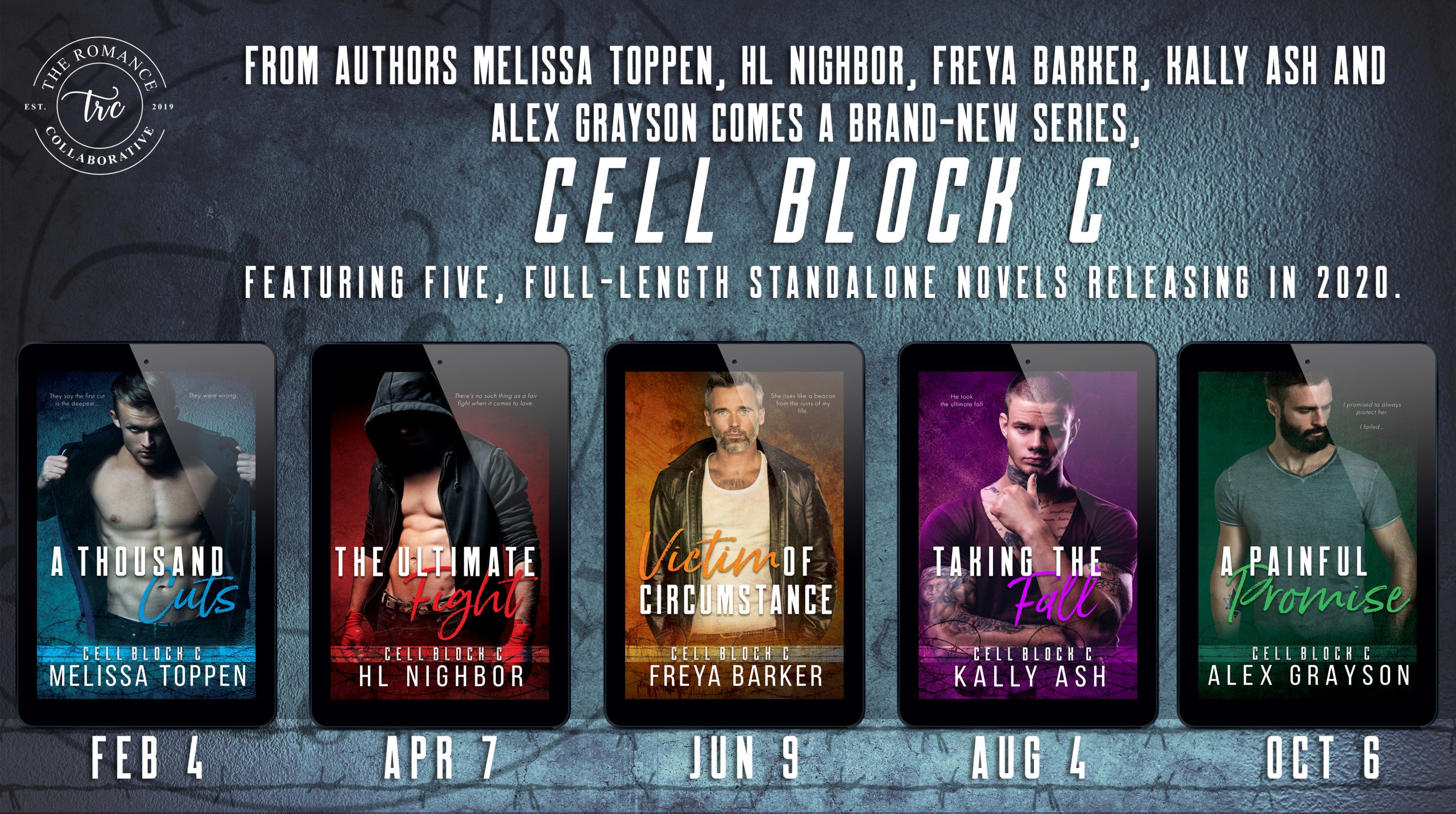